Seasonal memories of Charles Dickens’ London lifted from A Christmas Carol somehow let us feel better about our selves. We look back on less enlightened times and see how far we’ve come. We know the redemptive moral journey to be taken by Ebeneezer Scrooge and how it will resolve itself. The story scares with tragic threat but is ultimately safe, because there’s nothing in modern Britain seriously to compare, is there?

Scrooge was, after all, just a zero hours contract employer who paid less than a living wage, peddled consumer debt, and believed that benefits should be cut regardless of the impact on a person’s life chances (some were better off dead he said).

In modern Britain The High Pay Centre says we are on course for Victorian levels of inequality while school teachers report the return of Victorian conditions in some parts of Britain. Under a new, more punitive benefits regime nearly 90 people per month are dying after being declared fit for work under the regime of the Department for Work and Pensions.

The Bank of England warned recently of the vulnerability of indebted households and of an ‘uptick’ in reliance on personal loans and unsecured debt. Yet, the Office for National Statistics (ONS) reports a ‘bigger concentration of jobs at the bottom of the pay scale in 2015 than in 1997,’ while the Resolution Foundation estimates that working households on Universal Credit will lose between £1,000 – £1,300 by 2020. At the same time the pay of the average FTSE 100 CEO rose to being 183 times that of the average full time UK worker, up sharply from 160 times in 2010. And, while research repeatedly shows that high pay is often neither linked to performance nor improves it, recent finding from the Chartered Institute of Personnel Development shows high pay ratios have a strong demotivating effect on other staff.

The Chancellor of the Exchequer, George Osborne, is ideologically committed to austerity and hence the ‘Scroogeonomics’ described above, meaning that existing trends seem locked-in. What would turn it around?

Tiny Tim, the sick child of Scrooge’s much abused clerk, Bob Cratchit, is the moral fulcrum of the Christmas tale. So, at a Christmas seminar on Scroogeonomics at the Rich Mix centre, in a part of London marked by deep poverty in Victorian times, organised by Philosophy Football and the New Weather Institute, a group of radical economists including Ann Pettifor, Danny Dorling and Richard Murphy, together with members of the public, drafted Tiny Tim’s Ten Point Plan For A Better British Economy. It came out something like this:

1. Capital Controls: the right wing in Britain campaign against membership of the European Union by appealing to fears over sovereignty and yet, ironically, they support a far greater threat to economic autonomy: unconstrained capital mobility. Step one in replacing Scroogeonomics is the ability to make finance a servant to the useful economy and not its master, subject to democratic checks and balances.

2. Tackle the Tax Gap: the Government should publish and tackle the multi-billion tax gap – the difference between what companies and their wealthy owners should be paying and actually are. What’s missing is the glue that binds society together and pays for it’s needs and ambitions.

3. Replace wasteful, unsatisfying and debt-fueled consumerism with a healthy relationship to the material world: good work in a green, circular economy in which we care for, share and repair goods can create a ‘new materialism’ that helps everyone have what they need and flourish within planetary boundaries.

4. Better Economic Alternatives Already Exist: from banking to tax, investment, food, transport and energy the world is full of better policies. There are unsung stories of hope from communities producing their own renewable energy, creating their own currencies, growing their own food, running their own budgets and making the transition to a fair, zero carbon economy.

5. Speak Up About What is Being Lost: from libraries to essential services and the arts, counterproductive austerity policies are destroying many of the things that makes life good and society hold together. Austerity creates a domino effect of lost income, it is not prudent

6. We Have the Power to Change Things: a chaos economy is not inevitable, but a political choice made by those who simply don’t believe the mess should be managed and who, by-and-large, are wealthy enough to avoid the pain when things go wrong. We can choose to manage the chaos, rather than have the chaos manage us.

7. There Will Be Another Crash: this time there is no excuse not to see it coming. We should plan now for what to do after in the inevitable state of flux, asking what sort of society we want and what kind of economy can support it. More than learning from the past so as not to repeat it, like there was for Scrooge himself, there will be a chance for a new beginning.

8. We Are Better Together: our human ability to cooperate could be our greatest distinguishing feature among other animals, explaining our success as species. Culturally and economically we are interdependent yet economic policy promotes selfish individualism. Even the International Monetary Fund believes collective action through trade unions is vital for economic flourishing. The policy pendulum swung too far towards atomised individualism and must find a better, more communal balance.

9. Do Not Fear Failure: building a better economy is not easy, those who try shouldn’t beat themselves up if things don’t always work because the forces aligned against progressive change are large.

10. The Public Sphere Needs Re-asserting: from the neighbourhood to all our public goods, it is there to catch things when they fail – as it did, thanklessly, for the banking sector in 2007-2008 – and to make life better for all. Yet, through an ideological infatuation with private finance and interests, the Scroogeonomics of an overconfident establishment is undermining itself and the very public sphere that markets, and all of us, ultimately rely on.

Mince pies met politics in an unusually warm midwinter to remind us that nothing about our current situation is normal and much needs challenging. Ruth Potts from radical ‘writing, walking and talking’ organisation Bread, Print & Roses, saw a pattern in the first three proposals. Capital controls seek to bind money to geographical spaces subject to democratic control, tackling the tax gap is a way that we can bind ourselves to one another through providing public goods and services, and the ‘new materialism’ is a better way to bind ourselves to the material world of our life supporting biosphere.

With that we can truly promote a dynamic, green economy for hard working families that would create jobs, improve homes and the environment, and prepare Britain for the storms of the future.

But still we hear from the government the name of ‘Tina’, the acronym for ‘there is no alternative.’ Yet it took just a couple of hours of conversation to arrive at Tiny Tim’s Ten Point Plan. So, as one year waves into another, we can say, Tina is dead, and long live Tiny Tim.

This article was first published on the New Weather Insititute.

Andrew Simms is an author, analyst and campaigner. He co-founded the New Weather Institute, and is a fellow of the New Economics Foundation. Andrew will be blogging for PRIME on environmental / economic issues.

From Universal Basic Services to the Social Guarantee 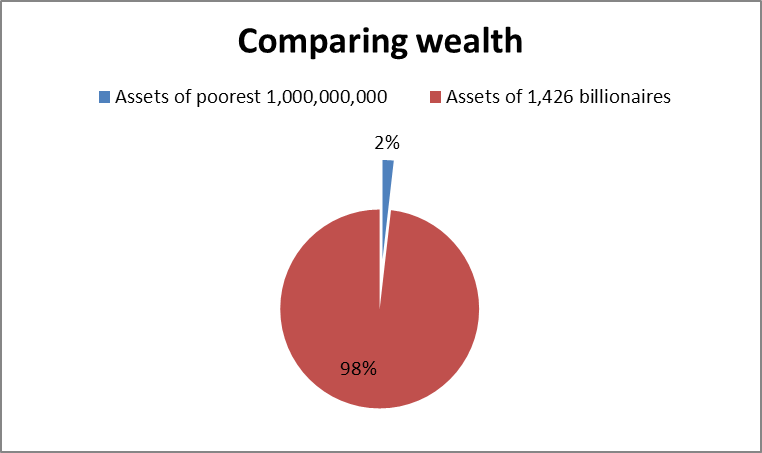 Inequality and Morbid Symptoms of a Financialised System