Editors’ note: This week PRIME is publishing the set of five lectures given by Karl Polanyi in autumn 1940 at Bennington College, Vermont, entitled “The Present Age of Transformation”.  The lectures have also now been put together for ease of reference into a pdf “publication”.  We post here the first lecture, “The Passing of 19th Century Civilization”.

The subject matter of these lectures is a vast and unique event: the passing of 19th century civilization in the short period that elapsed between the first and the second wars of the 20th century.

At the beginning of this period, 19th century ideals were paramount, indeed their influence had never been greater; by its close hardly anything was left of that system under which our type of society had risen to world leadership. Within national frontiers representative democracy had been safe-guarding a regime of liberty, and the national well-being of all civilized nations had been immeasurably increased under the sway of liberal capitalism; the balance of power had secured a comparative freedom from long and devastating wars, while the gold standard had become the solid foundation of a vast system of economic cooperation on an almost planetary scale. Although the world was far from perfect, it seemed well on the way towards perfection. Suddenly this unique edifice collapsed. The very  conditions under which our society existed passed forever. The tasks which face us in the present cannot, we believe, be understood except in the light of this tremendous event. It is both national and international, political and economic – all our institutions are involved. The historian is at a loss where to start.

The Conservative ‘Twenties and the Revolutionary ‘Thirties

The Great War of 1914-18 had been, on the whole, true to 19th century type: one alignment of great powers against another; belligerents and neutrals; soldiers and civilians; business and warfare; – all distinct and separate. Defeat resulted in a treaty which was intended to insure that life should continue very much as before. The War was about nothing in particular and had settled nothing essential; yet it had been more terrible than all its predecessors.

The trend of the ‘Twenties was distinctly conservative. The spectacular revolutions and  counter-revolutions  of  1917-23,  even  when  they  were  more than upheavals resulting from the shock of defeat, introduced no new element into Western history. Not only Hindenburg and Wilson, but also Lenin and Trotsky, were in the  19th century tradition. The tendency of the times was simply to establish, or eventually to re-establish, the system commonly associated with the ideals of the English, the American and the French revolutions of the 17th and 18th centuries. Radical policies served traditional aims. The Great War had been, in the main, an attempt to overcome by fruitless violence the difficulties which bogged the system since the beginning of the century; in the peaceful ‘Twenties this effort was intensified, but the effects of the War had merely enhanced those difficulties.

Suddenly in the early ‘Thirties, with an awe-inspiring vehemence, change set in. Its landmarks were the abandonment of the gold standard by Great Britain and subsequently by all other countries; the Five-year Plans, especially the collectivization of the farms in Russia; the launching of the New Deal; the National Socialist revolution; the collapse of the balance of power in favor of autarch empires. By 1940 every vestige of the international system had disappeared, and, except for  a few enclaves, the people were living in an entirely new institutional setting.

The Theory of External Causation

This bird’s-eye view of the quarter-century, 1914-39, shows clearly that change was sudden and world-wide, including in its range countries of the most various social and political complexion. Only a cause external to them all could have had such an effect. It was natural that contemporaries should have seen this event in the storm of blood and anguish of the Great War of 1914-18. But even at this short distance it appears, as we have seen, that the Great War, as well as the post-war revolutions, were themselves only an extension of the 19th century, and formed merely a phase  in a process of much greater depth and amplitude. We are thus forced to the conclusion that some other international development had silently shaped the course of history, until, by the end of the ‘Twenties, change surged forth in a vast transformation. We submit that this underlying comprehensive event was no other than the dissolution of the international system upon which our civilization had unconsciously depended for its life and growth.

The gradual changes leading up to this result were in progress long before the War 1914-18, but remained unnoticed at the time. Actually the system had been working under an increasing strain even since the turn of the century. In politics the formation of opposing alliances marked the end of the balance of power which presupposed the existence of a number of independent national policies and was therefore incompatible with a system of permanent power-groups.

In the economic field, this was accompanied by trade rivalries which disclosed the inability of the gold standard to organize a world economy without putting an undue strain on the national systems. But the Great War 1914-18 which resulted merely impoverished and brutalized the world without alleviating its troubles; eventually the Western treaties even aggravated them. For it is easy to see that the permanent disarmament of the defeated countries removed the very basis of the balance of power and thus made the political problem insoluble. This again reduced the chances of a re-floating of world economy, and, quite apart from its other weaknesses, the gold standard could not be expected to function except in conjunction with an international  political system assuring some measure of peace.

Now that this safe-guard against devastating wars had disappeared, a fortiori, all attempts to restore the gold  standard were bound to fail. In its endeavor to ease the tension under which the political and economic mechanism of the 19th century was laboring, the Great War had weakened that order fatally. The strenuous restorative efforts of the ‘Twenties were doomed to failure and their climax proved the threshold of catastrophe. When the international system finally collapsed, no country could remain unaffected.

The theory of the dissolution of the international system is strikingly borne out by the fact that everywhere the crisis was focused on foreign events, mostly on questions  of currency and exchange. There was hardly an international political crisis in Europe which had not a monetary origin. Exchanges were the all-embracing factor during the ‘Twenties. From the melting away of the external values of the Central European currencies to the World Economic Conference more than a decade later, there was an almost universal endeavor to return to the pre-war monetary systems. An unbroken sequence of currency crises linked the indigent Balkans to the  affluent U.S.A. through the elastic band of an international credit system which transmitted the strain of the imperfectly restored currencies first, from Eastern to Western Europe, and then from Western Europe to the United States, until America herself was borne down by the weight of the accumulated deficits of the greater part of the countries of the world.

The trade depression which broke over Wall Street in 1929 waxed to a hurricane owing to the tension which had been latent on the Danube and the Rhine since 1919. When, in the early ‘Thirties, the two Anglo-Saxon countries went off gold, the watershed between two periods of history was passed. While the ‘Twenties had still directed all their efforts to the preventing of the final breakdown of the gold standard, the ‘Thirties reversed this trend and exerted their energies toward adapting themselves to the accomplished fact of such a breakdown. In some cases the foreign situation turned more on political than on economic questions. But we need not attempt at this stage to distinguish too finely between the economic and the political aspects of the international system. It suffices that no analysis of the crisis can be adequate which does not allow for the principle of external causation.

As a matter of fact, the international system was both political and economic. The gold standard had become the basis of a world economy which embraced capital markets, currency markets and commodity markets on an international scale. This state of affairs was factual rather than legal; the people who benefited by it hardly realized its existence. In the political field there was nothing strictly comparable even to this informal organization. The balance of power which safe-guarded the nations from major wars and apart from which a world currency system such as the gold standard would not have been possible, had even less the character of a legal institution than the gold standard. But social organization does not depend for its functioning on formal sanctions. As a rule, a society does not become conscious of the true nature of the institutions under which it lived until those institutions have already passed.

However, the prevalence of the economic factor within the international system cannot be overlooked. The effective organization of the world was economic, not political. It was economic strain which caused the imperial rivalries, and smoothed the path to the Great War. It was the restoration of the economic system of pre-war days to which the statesmen of the ‘Twenties bent all their energies; reparations, stabilization of the exchanges, international debts, foreign loans, trade embargoes and cost of living indices were the immediate concern of the politicians as well as of the masses. And economic autarchy was the one universally dominant trend in the ‘Thirties.

But the breakdown of the international economic system stands itself in need of explanation. The attempt will take us far afield, for such an enterprise involves no less than the defining of the nature and origin of the present crisis. In other words, it involves a definition of our basic institutions, capitalism and democracy, in general human terms.

It is to this task that our next lecture will be primarily devoted. 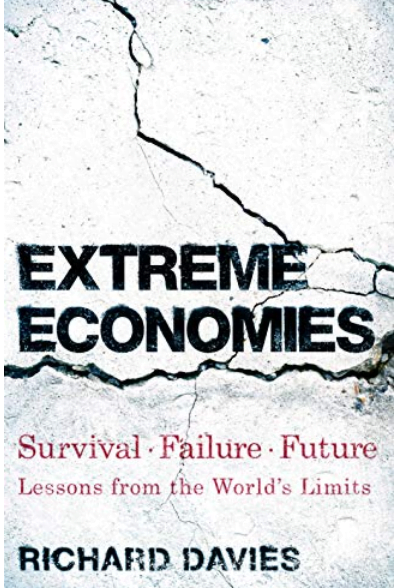 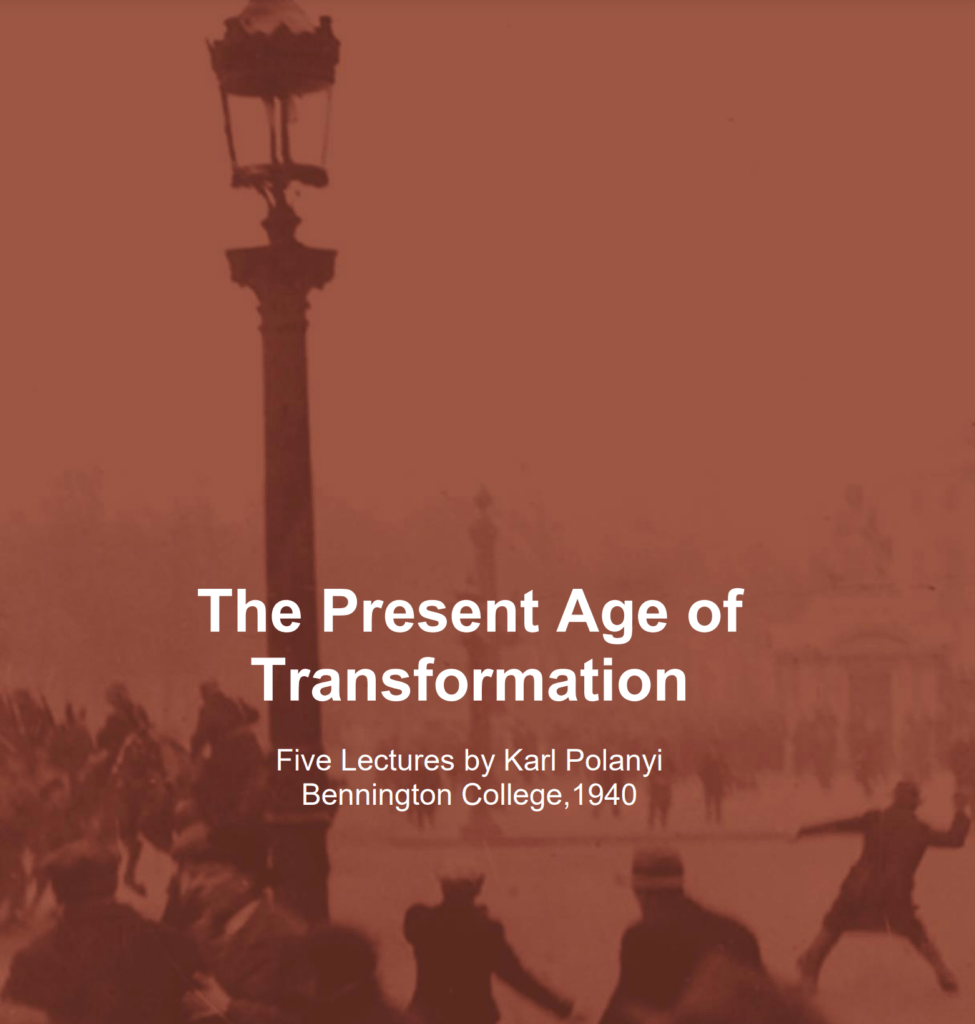