This is a briefing from Economists for Rational Economic Policies.  These address major current issues affecting the UK economy, in particular those associated with counterproductive “austerity” policies. To read as a pdf document, download here

Even the Daily Mail found it difficult to swallow the claim by Chancellor George Osborne that under his steady hand the public sector deficit fell by half (19 February).  As well the Mail might, because the claim is demonstrably false.

The chart below, using numbers from the Office of National Statistics shows clearly that the claim of fiscal achievement is nonsense.  Public sector borrowing fluctuates considerably over the course of a year because of the uneven flows of government expenditure and revenue collection.  Use of “annual equivalent” borrowing is the usual way to deal with this problem — borrowing for any quarter is the sum for that quarter and the three previous ones.  The chart uses that standard measure.

For the second quarter of 2010, when the Coalition took government, public sector borrowing was £150 billion.  Borrowing for the last quarter of 2014 — the most recent statistics — dropped slightly below three digits to £97 billion.  Simple arithmetic produces a decline in borrowing of only a bit over one-third (35.8% to be exact).

A bit closer to the claim of the Chancellor is the deficit as a share of gross national product, from 9.6 to 5.3, a fall of 45%, edging in on “half”.  However, the latter contradicts the claim more than it supports it.

Critics of austerity policies — deficit reduction through expenditure cuts — have consistently argued that the deficit would disappear as a result of economic growth.  As the economy grows tax revenue rises and several important expenditures decline, for example payments to the unemployed.  This process, a reduction in borrowing built into economic growth, explains why the deficit to GDP ratio fell by 45% and borrowing itself by only 36%.

These numbers considerably understate the failure of the Chancellor’s policies.  In great part because of the expenditure cuts the recovery of the economy from the current, on-going recession is the slowest on record (ONS, Economic Review (July 2013).  Without the cuts the economy would have grown faster and the deficit declined more.  A study for the National Institute of Social and Economic Research by Simon Wren-Lewis estimates that austerity policies came at a cost of 5% of GDP in 2010.  He concludes that “…a conservative estimate” of austerity policies would be “about £100 billion, or £1500 for each adult and child in the country.”

The Yiddish word “chutzpah” means excessive audacity or extreme insolence.   A favourite way to epitomize its meaning is in the tale of the child who murders his parents then asked the court for leniency because he is an orphan.

In May 2010 George Osborne promised that his policies would bring the UK deficit below 1% of GDP in fiscal year 2014/15.  With only a month left in that fiscal year he brags that he has cut the deficit to 5½ %.  Now, that’s chutzpah. 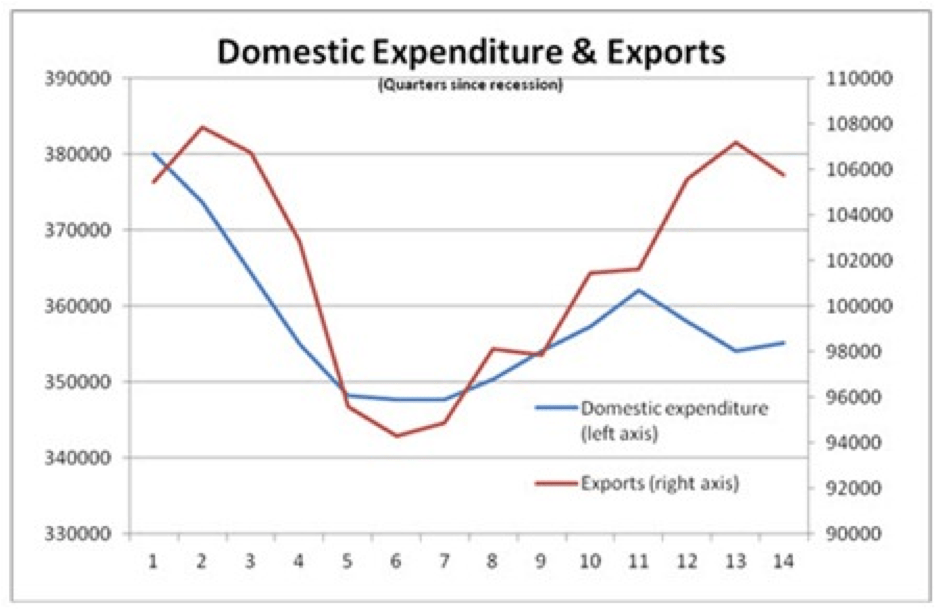