Much of the debate over Brexit focuses on narrowly on trade in goods.  In that debate one finds relatively little discussion of the performance of the EU internal market with regard to commodity trade (“goods”). The typical argument for the British government  negotiating a post-Brexit agreement presumes that EU internal market rules facilitate robust trade outcomes, and that operating outside of it would undermine goods trade.  But has the EU internal market in fact facilitated trade among members?  How should that be assessed?

One aspect of the European Union, the most important aspect for neoliberals, is the internal market, frequently mis-named the “single market”.  The EU internal market is a customs union embedded within a form of political union in which the member governments have agreed to more favourable commercial relations among themselves than the group allows non-members.  This is frequently and inaccurately summarized as “free trade” among members, and trade protection against non-members.

The terminology is inaccurate because no trading relations are “free” if by that word one means without regulations.  Environmental and other regulations apply within the European Union, that define what can and cannot be traded.  Because of these regulations the EU internal market does not have “seamless trade”, a frequent and misleading cliché.  Whether the specific regulations governing EU internal trade are more or less restrictive than those applying to non-members is an empirical question.

This asymmetry, that extra-EU exports may face less regulation than extra-EU imports, suggests the possibility of different patterns for exports and imports, which is what the statistics indicate.  Figure 1 shows annual rate of growth of intra- and extra-EU imports for the 19 euro zone countries and the 9 EU countries with national currencies, from the introduction of the euro in 2001 through 2017.  Of the 19 euro zone countries, a bare majority, 10 of 19, intra-import trade grew faster than extra import trade.  Among the non-euro countries, in 7 of 9 intra-EU imports grew faster.

One would have expected the opposite result.  One purpose of the introduction and adoption of the euro was to reduce transactions costs, thus making trade among euro users cheaper and more “seamless”.  The statistics indicate the contrary, which suggests that any cost-reducing role of using the euro was outweighed by other effects.  One such effect might relate to level of development and structural characteristics. The ten countries in which intra-EU imports grew fastest were from the Baltic region or central Europe, in transition from centrally planned economies (annual rates in percentages): Lithuania (10.9), Slovakia (10.7), Romania (10.5), Bulgaria (9.2), Latvia (8.7), Estonia (8.6), Czech Republic (8.5), Poland (8.3), Hungary (6.7) and Slovenia (5.1).  For all ten except for Slovenia, intra-imports grew faster than extra-imports.

The same statistics on exports supports the hypothesis that EU rules restrict trade.  Of the 28 countries, for only one country, Bulgaria, did intra-EU exports grow faster than extra-EU exports (10.7% and 8.9%, respectively), and for one the rates were the same to one decimal point (Sweden, 2.7%).  The statistics also cast doubt on the reputation of the German economy as an engine of export growth.  Over the seventeen years, German intra-EU exports grew slower than in 12 other EU countries (thus faster than 15); and for extra-EU exports, 16 countries showed faster growth rates (eleven slower).  The expanding German goods surplus resulted from relatively slow growth of imports compared to exports, rather than rapid export growth.

It is noteworthy that that Britain is the only country with a negative growth rate for intra-EU exports (-0.3% per annum), closely followed by Ireland (0.0) and Finland (0.3).  The negative rate for Britain reflects a long term trend, beginning before the global crisis of 2008.

These statistics suggest a few obvious conclusions.  First, the EU internal market has integrated the formerly centrally planned countries into international commerce, though more so for imports than exports.  Second, the EU internal market does not foster internal trade growth relatively to the non-EU market.  Its benefit to its citizens is probably consumer protection rather than cheap goods, a far more important benefit.  Third, the euro has not facilitated trade within the internal market, neither for imports nor for exports.

I and many others have for several years argued that benefits from trade is a weak argument for British membership in the European Union.  The statistics support that conclusion and indicate that it may well apply to most EU members.   Those of us who wish that a British government would “reverse Brexit” should make the strong arguments for membership which are political and social, not economic. The Minor Mystery of the Euro’s Trade Effect 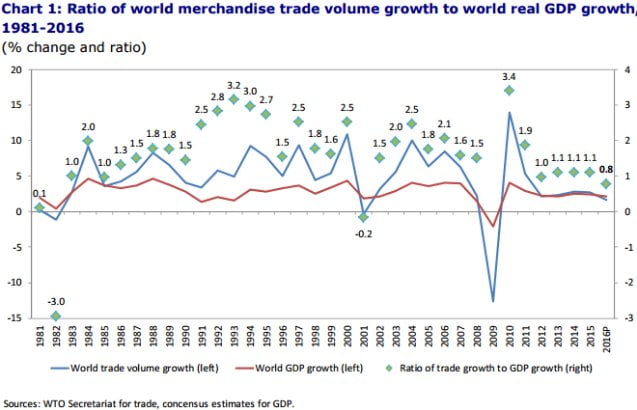