By Graham Gudgin and Ken Coutts, University of Cambridge

The OBR’s approach to forecasting has always been pretty arbitrary, but yesterday the arbitrariness became completely transparent, rendering its forecasts for Government deficits close to meaningless.  The OBR’s forecast for GDP (and hence government revenues, and much else) is obtained as a projection for productive capacity. This in turn is a simple projection of labour productivity multiplied by labour supply as currently projected by the ONS. The OBR’s approach to the key productivity projection is simplistic. Last November they saw an uptick in the flat path that productivity has pursued since 2008 and assumed that productivity would in future follow its pre-2007 trend growth rate of 2.2%pa. With a small increase in labour supply, this gave them their optimistic GDP forecast of 2.4%pa (essentially forever).

What they did yesterday was to say the uptick has down-ticked again and that they are no longer confident that productivity would grow in future at 2.2% p.a. In fact productivity has continued its flat trend since 2008, so what did the OBR do? They now assume that productivity will grow at 2.0% per annum every year. Why pick this number? Who knows? It is essentially arbitrary, and OBR forecasting is now a matter of ‘pick a number’. This of course makes an absurdity of the whole game of assessing whether the UK economy is on track to balance the Budget by 2019/20. The OBR’s current projections for the deficit are conditional on their arbitrary productivity assumption. Different assumptions would give variant projections for the deficit.  A reasonable approach might be to present a range of scenarios, but this would merely emphasise how much uncertainty there is over something like the deficit. Not only is the deficit a residual between the large numbers for spending and revenues, but it also depends on the highly uncertain future growth of GDP

We assume that the OBR are trying to maintain some credibility by abandoning last November’s unrealistic optimism. They are staying with the OECD/IMF pack by downgrading their GDP forecast. Right at the start of the current EFO the OBR say that the new pessimism is based on the fall in global stock markets and commodity prices since their last (November) forecast). This may have seemed the case when they were doing their work in January and February, but by publication date yesterday the UK and US stock markets had recovered most of their January losses and the oil price was recovering quite strongly. What has happened, we feel, is a general loss of confidence across developed economy official forecasters that the post-crisis malaise has yet come to an end. Their models are little help so they are falling back on gut instinct.

The Government should drop its target for the fiscal deficit and repeal the associated legislation. It should recognise the Keynesian argument that the Government has little control over the deficit. While Government can influence spending up to point (junior doctors and others permitting), it has only indirect influence over the private sector and hence over tax revenues. If the private sector wishes to save then, by the laws of arithmetic, the public sector is likely to have a deficit.  In any case the UK Government deficit will soon drop below a manageable 3% of GDP at which point the debt will begin to fall as a share of GDP. If the deficit were to stay close to say 2% of GDP the debt to GDP ratio would fall slowly, but it would fall and few would be alarmed. We have recently come through the worst financial crash for a century, and will need to live with the consequences for a long time. Let’s be patient and focus on more important aspects of policy. 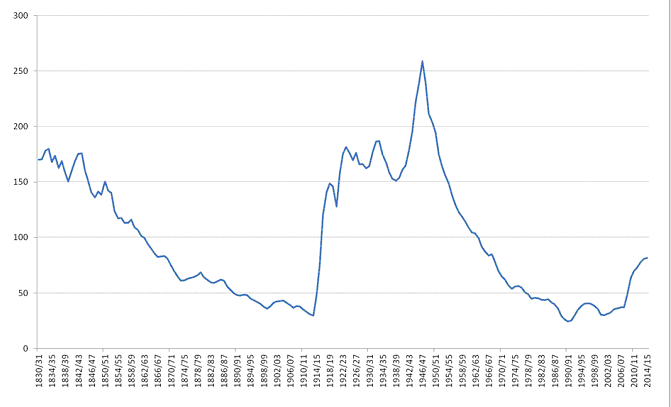