This is  Özlem Onaran ‘s contribution to the EREP review of the UK economy 2015, “the Cracks Begin to Show”.  The full report can be downloaded here.

Growth in Britain is still based shaky grounds as it is driven by a massive increase in private household debt, and will remain fragile to any increase in interest rates in 2016. Just as before the Great Recession, working people are obliged to rely on debt to maintain their living standards in the absence of a healthy growth in their wages and salaries.

The rise in inequality and stagnation in wages are among the fundamental flaws in our economic model, which have been at the root of the Great Recession, and we are far from correcting this imbalance. Real pay is still 9% lower compared to its peak in early 2008. After the longest and most dramatic period of decline in real wages since the Victorian times, waged and salaried people in Britain are looking to a recovery in their incomes not much before 2017.

Note: Labour compensation adjusted for the labour income of the self employed as a ratio to GDP at factor cost; 2014 is provisional data; 2015 is forecast. (source: AMECO).

The lack of a full recovery in wage income continues to be a drag on household confidence and demand, which in turn discourages business investment in the absence of a healthy growth in domestic demand. Our research shows that in Britain a lower share of wages in national income leads to both a lower GDP and lower private private investment. Despite increasing profits private investment remains to be weak.

Next to wage restraint and rising inequality, financialization is the other major brake against investment and growth. According to recent research at the Greenwich Political Economy Research Centre on the investment behaviour of non-financial corporations in Britain, not only high dividend payments, but also increasing financial revenues of firms due to their surging financial activities, crowd out private investment in physical machinery and equipment. Lower wages lead to increasing profits, but bleak prospects in terms of demand, and this in turn discourages investment despite high profitability; in the meantime firms direct their profits to financial speculation.

Perversely financial activities do not provide more funds for productive activity. In the absence of strong investment performance, it is no wonder that productivity in Britain is lower than other developed countries. There is no productivity puzzle! This is also why Britain’s export performance is so weak despite falling labour costs: international competitiveness is more about productivity than labour costs, particularly in a world of race to the bottom in labour costs.

A strong recovery with decent jobs as opposed to fragile debt driven growth requires a strong recovery in wages embedded in a broader macroeconomic and industrial policy, financial regulation and corporate governance framework. Only then will investment and productivity follow. Simply improving trade union legislation could take us a long way: if the trade union density were to increase back to its level in 1980, when half of the employees were member of a trade union (as opposed to the current level of union density of 25%), the share of wages in national income could increase by up to 9%-point, and GDP per capita in the UK could increase by £444 (or 1.6%). 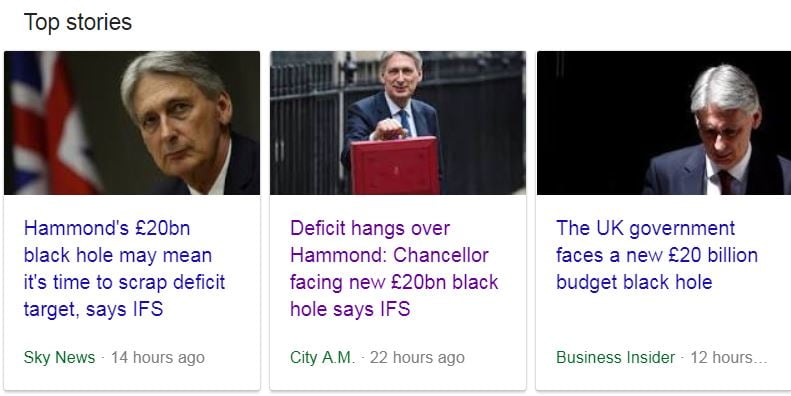 The deficit & the IFS: a black hole between a rock and a hard place?