By Professor Victoria Chick – Presented at the Progressive London Conference.

The downturn in GDP reported for the last quarter of 2010 may have been due to the wrong kind of snow or may have a more obvious cause: the rational response of the private sector to the immanent cuts in government spending.

It’s not rocket science: presumably everyone in this audience understands that if government cuts expenditure, this is a straightforward drop in employment and income. That will surely cause expectations of private sector profitability to fall and result in further retrenchment of output and employment.

This government professes to believe that the private sector will expand output to fill the gap left by government expenditure. But why should they expand? Where will increased sales come from when income is shrinking?

The most likely reason for the present government’s fiscal stance is that it is just a smoke-screen for demolishing the welfare state and further lining the pockets of the rich (that is what Conservative governments do). But such an aim is, naturally, unspoken – perhaps unspeakable. So let us consider the current policy from a purely economic point of view.

Perhaps this government knows what will happen to output and employment but believes that the expected response of the financial markets to a continuing deficit should take priority; the fate of those who will be thrown out of work is a ‘price worth paying’ to protect the government’s credit rating. Government is about hard choices: Churchill did not warn Coventry of its impending doom, in order to prevent the Germans knowing that the Enigma code had been cracked. A tough choice for sure, but at least the trade-off was clear. The response of financial markets is not clear at all: it is merely a supposition.

Nor it it obvious that cuts will reduce the deficit.

The first thing to understand about the aim of deficit-reduction is that it is not in the government’s power to determine the deficit. They can influence it, but they cannot determine it. If you or I want to cut our deficit, Mr Micawber long ago told us what to do; in any case it is common sense. And the outcome is reliable. But this is not true for government: they are simply too big. The economy is like a company town, and government is the company. The deficit is the outcome of their decisions and everyone else’s in response to it. If economic activity falters, the tax take will drop and benefit expenditures rise. The deficit may well increase. History shows a strong negative relationship between sustained changes in government expenditure (excluding transfers) and the debt/GDP ratio.

So the cuts may well be self-defeating, at least as regards their stated purpose. They may well push us back into recession and frighten the gilts market.

The deficit, as everyone knows, is as bad as it is because of the extraordinary expenditure in response to the financial crisis and its effect on the real economy. The present government ignores this fact and concentrates on the fact – and it is an unfortunate fact – that the previous government did not allow a surplus to emerge when economic activity was buoyant, before the crisis.

Why did they not? If you believe the present government, the previous government was simply feckless. But well before the financial crisis broke it was clear that there was an underlying weakness in the economy: a secular decline in private investment, brought about by falling expectations of profit and not helped at all by the high rates of interest that have prevailed since the 1970s. Keynes, Marx and neoclassical theory all predict this long-term decline as capital accumulates, in the absence of technological change and population growth. Technological change has been mainly responsible for disguising this trend, which has been evident since the early 1970s. This weakness is, I believe, a central reason for the emphasis on consumer expenditure and – more importantly – the turn to finance as a ‘generator of wealth’, which was so highly praised by the last government.

Finance is all based on promises, and the performance of the real economy, which finance should support, is the only basis of its long-term success. I am not saying that money is only a veil, but I am saying that making money out of money and inflated asset values has no long-term future – and so it has proved.

In view of global warming, a slowdown in the real economy may be no bad thing, for one thing is certain: we cannot rely on ‘business as usual’; we cannot go on as we have been. A return to growth would be far more efficient in cutting the deficit than the cuts will be, but growth as before can only be a short-term measure. In the longer term, growth is not only threatened by weak investment opportunities: the economy is way out of kilter. Income distribution is skewed, house prices are ridiculous, the financial sector is overweening and irresponsible, much of the real economy is misdirected. All this is the result of uncritical reliance on the market, a policy supported by successive governments and about to be intensified. We must not only think growth, but what kind of growth. Let growth be directed to green infrastructure, sustainable farming, health, the arts and education – activities which will enrich our lives and protect of our environment. Instead of this, the present government is heading in precisely the wrong direction. 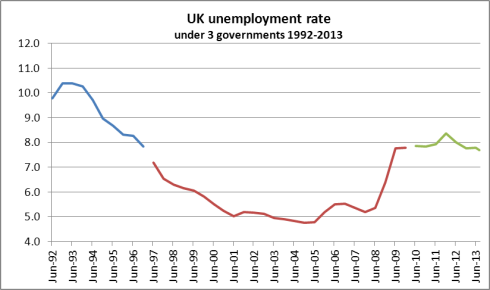