Today’s “negative growth” GDP figures tell us that the economy is probably smaller today that a year ago.  And we may expect that, once again, the Office for Budget Responsibility and other experts will soon have to reduce their estimates for the UK economy in 2012.

But on close examination of last month’s Budget Report, we can see that the Government has sneaked in its very own – highly significant – downgrade in its outlook for the economy – as well as seeking to downplay the role played by excessive private debt – especially of the financial sector –  in the UK’s economic difficulties.

Chapter 1 of the 2011 Budget Report started with the following heading:

“A strong and stable economy”

Compare this with heading Chapter 1 of the recent 2012 Budget Report:

Something significant has disappeared over the course of the year…… economic strength!

But a close reading of the Governments three Budget Reports shows an important re-working of the government’s ‘narrative’ of the crisis, its causes and its solutions.

The 2010 Report starts as follows:

“Over the past decade, economic growth in the UK has been driven by the accumulation of unsustainable levels of private sector debt and rising public  sector debt. This pattern of unbalanced growth and excessive debt has helped create the exceptional economic and fiscal challenges that the Government must address, to restore the economy to sustainable, balanced and private sector-led growth…. While rising debt was an international phenomenon, it was more pronounced in the UK than in most other countries. It has been estimated that the UK has become the most indebted country in the world.”

The 2011 Report followed a very similar path.  It opens:

“Over the pre-crisis decade, developments in the UK economy were driven by unsustainable levels of private sector debt and rising public sector debt. Indeed, it has been estimated that the UK became the most indebted country in the world.  Chart 1.1 highlights the rise in private sector debt in the UK. Households took on rising levels of mortgage debt to buy increasingly expensive housing, while by 2008 the debt of nonfinancial companies reached 110 per cent of GDP. Within the financial sector, the accumulation of debt was even greater. By 2007, the UK financial system had become the most highly leveraged of any major economy. The level of public sector net debt as a share of GDP steadily rose from 2001-02, as the government ran a persistent structural deficit, despite continued economic growth….Increasing reliance on the financial sector and borrowing in the private and public sectors drove growing imbalances in the UK economy”.

The 2012 Budget Report, however, takes a significantly different perspective in its opening words:

“The financial crisis of 2008 and 2009 exposed an unstable and unbalanced model of economic growth in the UK based on ever-increasing levels of public and private sector debt. As a result of that crisis, and unsustainable levels of public spending, the Government inherited the largest deficit since the Second World War and the UK economy experienced the biggest recession of any major economy apart from Japan.” (Our emphasis)

Here, public sector debt has been put first, and the only reference to ‘unsustainability’ now is to levels of public spending.  Chart 1.1. has disappeared entirely.  We are led to believe that private sector indebtedness was really of minor importance, compared to public sector debt.

The reality is that the reverse is true.  The 2008-09 crisis was mainly caused by private sector credit-driven imbalances, largely in the financial sector.  The 2010 and 2011 Budget Reports refer to and draw on McKinsey’s important work on Debt and Deleveraging, published first in 2010, comparing different countries’ positions, and most recently updated in January 2012. These reports include a chart which shows not only UK private sector debt by sector as a % of GDP, but also include public sector debt.  Here is the most recent:

The structure of UK debt

But the unique feature of the UK’s debt structure is the growth of finance sector’s debt, much of it speculative and leaving the baking sector exposed, leading also to a housing and construction bubble leading to high levels of domestic debt.  This is why the earlier Budget Reports’ references to unsustainable private debt were correct and necessary – and why the 2012 Report wrongly highlights the role of public sector debt.

How important is private sector debt and deleveraging?

There are those within the Treasury and Bank of England who now seek to downplay the importance of private debt levels, even as high as the UK’s, insofar as they are backed by assets (through mortgages etc.).

In March 2012, Ben Broadbent, an external member of the BoE’s Monetary Policy Committee, and former chief European economist at Goldman Sachs, made a well-publicized speech on deleveraging, in which he argued

“against the notion that ‘we all borrowed too much’; it will only end when gross debt ratios return to some historical average; and as ‘the most indebted country in the world’, that process will presumably, therefore, take longer – and optimal monetary policy stay looser – in the UK than anywhere else. What distinguished the UK was not so much the size of its mortgage market but the extent and riskiness of its banks’ overseas balance sheets. It is there that most of the losses were made, and there still, in my view, that the larger risks reside.”

“The evidence suggests that, at least until the middle of the last decade, the long expansion of gross private-sector debt occurred not, in the main, because borrowers became more profligate, or lenders more careless, but as a passive response to the gradual decline in long-run, risk-free interest rates. The proceeds were largely transferred, not spent, and ultimately, balance sheets grew precisely because the decline in interest rates made them more affordable.”

PRIME does not accept most of Broadbent’s reasoning.  Households do not repay debts from their ‘net financial wealth’. They repay them out of income, and austerity is making the ‘certainty’ of future income with which to repay debts, very uncertain. Moreover, assets inflate in parallel with debts (the bubble inflation process) so debt as a share of assets will always appear ‘reassuring’, until asset prices collapse and the mountain of debt is exposed.

Similar errors were made by ‘orthodox’ economists prior to the collapse of Iceland’s banking bubble in October 2008.  Professors Richard Portes, (ex-President of the Royal Economic Society)  and Fridrik Mar Baldursson co-authored a November 2007 report for the Icelandic Chamber of Commerce, in which they concluded that

“… the Icelandic economy and financial sector are highly resilient…. With regard to both the macroeconomic situation and the characteristics and performance of the banks, we consider that the current market premium on Icelandic banks is excessive relative to their risk exposure and in comparison with their Nordic peers. …Overall, the internationalisation of the Icelandic financial sector is a remarkable success story that the markets should better acknowledge.”

Another external member of the Monetary Policy Committee, David Miles, made an important speech on the housing market in March 2011, in which – in contrast to Broadbent – he emphasized the risks in the UK housing market:

“In the years leading up to the crisis the average spreads on new loans were falling as the quality of information on new borrowers’ incomes was almost certainly declining. And at the same time typical loan to income ratios of new borrowers were rising fast. Prior to the crisis, lending standards had been relaxed very significantly. The FSA estimates that in 2007/08, for about 50% of mortgages, income was not verified, up from 28% in 2005. This means that a significant proportion of borrowers may have been effectively self-certifying their income.”

He was also concerned at the failure to price risk in any proper way:

“The failure of pricing to reflect risk differences is something I focused on in the Mortgage Review I undertook in 2003 and 2004. I felt then that it was a problem and that it was undesirable that existing borrowers with low loan to value ratios and who had a track record of servicing loans often paid much higher rates than those with large loans, relative to their incomes and to the value of their homes, and who often also had no track record of paying debt and sometimes limited proof of income.”

The issue of the price of credit (the real interest rate) is important, but difficult to demonstrate clearly, since it depends on lender, length of term, type of loan and rate of inflation.  We do not accept that credit was particularly ‘cheap’ even in the post-2000 years, as Mr Broadbent contends, though we agree that risk was not accurately reflected across the portfolio of loans.

The issue of private as well as public sector debt is not only an economic one – it is redolent with political implications.  The Chancellor’s response to today’s poor GDP figures concentrates only on the public debt:

“The one thing that would make the situation even worse would be to abandon our credible plan and deliberately add more borrowing and even more debt.”

This is in line with the gear-shift in the 2012 Budget Report, set out above, which blames only the public debt for our troubles.  This reflects an essentially political rather than economic position.  Fair enough, for a politician. But if the UK economy is to improve, if unemployment and under-employment are to decline, if public services are to be maintained, we need sensible economic policies to drive the economy forward. 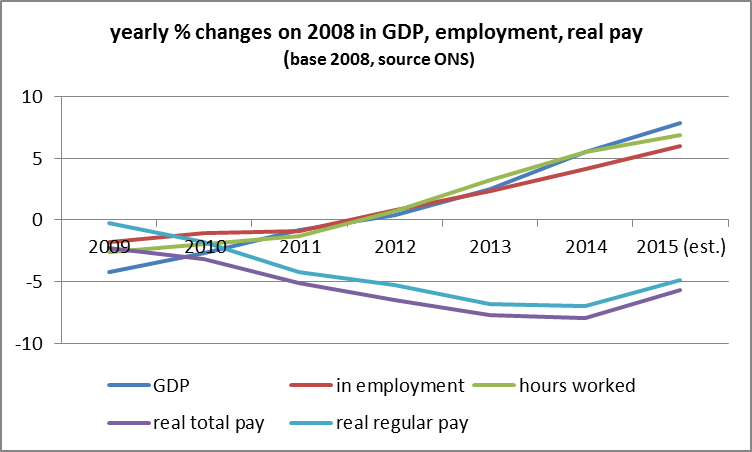