Payday and pawnbroker lending in the UK has risen from £1.6bn in 2008 to £5bn in June 2013.[1] While this lending activity is still a small percentage of UK GDP, nevertheless payday lending is one of the fastest growing industries in the UK.

Because of austerity policies on the one hand, and inflation on the other, British incomes are still falling in real terms. And because the big commercial banks are unable and/or unwilling to lend to all sectors – payday lending is expanding fast. Those who do not have enough money to get by on a day-to-day basis, and who are unable or unwilling to cut back on spending – are turning to “legal loan sharks”[2] that charge usurious rates of interest on short-term loans.

This borrowing is often undertaken by individuals under pressure, and without consideration of the real cost of the loan or debt, thus piling up problems for themselves in the future. It is also ineffectively regulated borrowing – with government, the Bank of England and other regulators turning a blind eye. Worse, this debt is accumulating within a deflationary environment (i.e. wages have fallen and prices are now beginning to fall). In these circumstances the cost or value of debt rises. (In an inflationary environment the reverse happens: the value of debt falls.)

That is why we dub the UK economy the: “Alice in Wongaland economy”.

Their services come at a high price. While annual percentage interest rates (APR) are indeed a misleading measure for short-term loans, the Guardian estimates interest rates on payday loans at between 30% and 35% per month.[3]

Max Keiser, popular financial broadcaster has coined the term “interest rate apartheid.” He is describing a system where some individuals can borrow at lower rates, while the under-capitalised are forced to borrow at exorbitant, usurious rates.

Payday lenders – at micro level – are today recreating the conditions of the past decade during which ‘sub-primers’ were charged high interest rates for loans that were ultimately unpayable. And we all know how that ended…

But the system entrenches a damaging divide for an economy as unbalanced as Britain’s. While banks and other financial institutions are able to borrow at very low rates from central banks (often for speculative purposes) they nevertheless lend to other, more productive sectors of the economy at much higher rates. In Britain, banks and other financial institutions can borrow from the BoE at 0.5%. However, according to the Bank of England’s latest Trends in Lending the average indicative rate for smaller SMEs is nearer 5%.[4] By means of this ‘carry trade’ private banks use the resources of public banks to recapitalise their institutions and clean up their balance sheets. The economy’s small firms are charged much higher, real rates.

No wonder levels of investment in Britain are so very low.

Recent growth numbers for UK services, manufacturing and construction suggest that Britain is recovering after the recession double dipped in 2011/12. Private consumption has risen. However wages remain low. According to the Office for National Statistics household income in Britain declined before the crises between 2001/2 and 2006/7 by 1.4% per year. Since the recession, income before tax has declined at an average rate of 2.1% per year, according to the BoE. If income is not rising, how is increased consumption financed?

The Bank of England Money and Credit statistics show that financing is increasingly derived not from mainstream banks, but from other credit institutions –such as pawnbrokers or payday lenders.

The Bank’s statistics[5] reveal that amounts outstanding to conventional banks and building societies fell by 13.13% between July, 2011 and 2013. In stark contrast the amounts outstanding with “other” creditors (payday lenders etc.,) increased by 18.75% over this period. In other words, borrowers were effectively deleveraging debt owed to conventional banks and building societies over this period. At the same time payday borrowers were releveraging debt owed to moneylenders that are effectively unregulated.

Between July and September, 2011, lending by conventional banks and building societies was negative. Borrowers paid back £138 million more than they borrowed. At that point High St bank borrowers were deleveraging.

Over this same period, lending by the unregulated sector was positive. In the autumn of 2011, when other borrowers were deleveraging, payday borrowers were leveraging debt; increasing borrowing over repayment by £33 million.

Between April and June 2013, borrowers from High St banks were releveraging again. Lending was positive, i.e. borrowing exceeded repayment to banks by £1,01bn.

Over the same period borrowers from unconventional lenders releveraged too, but by a slightly higher margin than that for High St. banks: £1.05bn.

The changes in net lending show that both mainstream and less regulated moneylenders have increased lending. But payday lenders have expanded lending by more than High St. banks have. Given that their lending is far riskier and also much more costly, this development signals danger signs.

The graph below shows the rapid increase in the growth of this effectively unregulated moneylending sector.

In comparison to Germany and the US, the British “recovery”, based as it is on consumption and risky, very expensive borrowing, seems illusory and dangerously fragile. 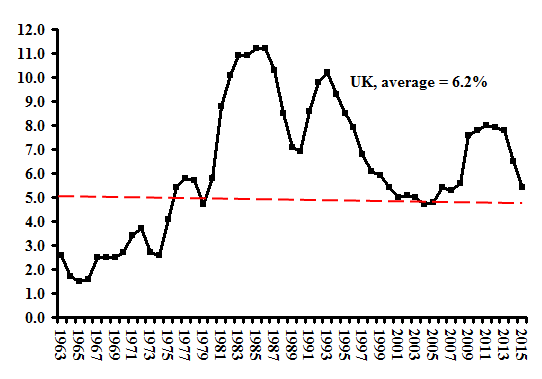