George Osborne has told the BBC that there will be £40bn in ‘credit easing’ so that small firms can obtain both cheaper and more readily available loans. Osborne has called the scheme a ‘game-changer’. If the funds had the stated impact, of increasing investment by small and medium-sized enterprises (SMEs), then it would certainly provide a significant lift to the economy. £40bn is equivalent to 2.8% of GDP.

The strength of this overblown rhetoric may be judged by the fact that there are widespread reports that the Office for Budget Responsibility is set to slash its growth forecasts for 2012 to just 1% from 2.5% previously.

How is it that significant funds for new investment by business will actually lead to no improvement in the outlook for growth, even on the usually over-optimistic forecasts from the OBR?

There are to be at least two, possibly three funds. The first will be guarantees to increase the availability of credit. The second will be a fund to lower the cost of that credit to SMEs. Since SEB continually argues for increased investment, surely this is a good thing?

Even official forecasts do not assume that growth will significantly improve as a result of this policy. This highlights the fallacy that underlies all current attempts to persuade, cajole, demand or bribe private firms to increase their investment. The fallacy is that those firms are struggling under the burden of insufficient funds to invest. Of course certain individual firms may have such difficulties. But in aggregate that is not the case.

In a previous bulletin SEB showed that in 2010 the total Gross Operating Surplus of the business sector in Britain was £475bn. These are akin to profits. Yet the entire level of investment (Gross Fixed Capital Formation) was just £214bn in 2010. As this includes the investment by both private individuals and government, it is clear that businesses have vast resources already from which they could increase investment.

The chart below shows the decline in total Gross Fixed Capital Formation (GFCF) and corporate sector GFCF. Both these measures of investment began falling one quarter before the recession itself began. The fall in both at their low-point in the 4th quarter of 2010, of over 20%, is approximately three times as great as the fall in GDP of at 7.1%. Both chronologically and arithmetically the decline in investment, led by declining business investment, led the recession.

Private sector investment led the recession. But it cannot lead the recovery. This is demonstrated in the chart below, which shows corporate GFCF and GDP.

The recovery in business investment occurred two quarters after the economy as a whole began to recover. This is because the increase in investment did not depend on the availability of resources, as profits have exceeded investment by some distance throughout the entire crisis.

This is what happened in 2009-10. GDP began to expand in mid-2009 and six months later corporate GFCF began to increase. Precisely the same time lag operated in the reverse situation. Corporate GFCF fell once more in the 1st quarter of 2011. This was six months after the modest recovery peaked n the 3rd quarter of 2009.

This led directly to the increase in GDP which in turn eventually prompted the private sector to increase its own investment. The Tory-led Coalition immediately cut public investment on taking office, and six months afterterwards private investment began to contract once more.

Instead of subsidising the private sector to invest, the proven means of achieving that end is for government to increase its own investment. It could divert the support for borrowing costs to agents who are willing to invest, such as local authorities who want to invest in housing, infrastructure, transport and education.

Even on official forecasts the borrowing subsidy to SMEs will not work. But the recent history of the British economy shows that investment by the public sector will have the effect of restoring growth which in turns leads o a revival of corporate investment. Subsidies and bribes to businesses to invest will not work while there is no growth. Increasing, not cutting, the investment of the public sector will lead to recovery. 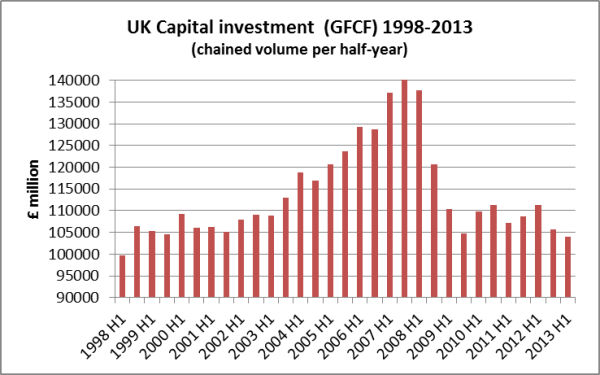