In yesterday’s Financial Times, Henny Sender has written a piece “Blackstone invests to edge out Wall Street” – interesting in its own right – about how huge US private equity fund Blackstone is investing in data and technology companies  to enable it to bypass its traditional bankers and brokers, thus saving paying out loads of fees to Wall Street.

But what really caught my eye was this passage:

“Cutting out Wall Street could save hundreds of millions of dollars, but risks upending the cozy relationship private equity groups such as Blackstone enjoy with the banks.

Blackstone’s importance to Wall Street has paid dividends. In 2010, when its investment in Hilton Hotels was struggling in the wake of the global financial crisis, it persuaded banks to forgive $4bn in Hilton debt on very favourable terms.

Blackstone executives called around to remind banks how much it paid them in fees, according to people familiar with the conversations. Distressed debt players trying to get hold of chunks of the debt say they watched in disbelief as the banks “caved”, in the words of one such person.” [bold = my emphasis each time]

Thus one of the world’s (and US’s) wealthiest companies, Blackstone (with some of its wealthiest owners) is able to get “debt forgiveness” without any fuss, whilst another of the US’s wealthiest private equity funds, Paul Singer’s Elliot Management, relentlessly chases the state and (mainly poor) people of Argentina across the globe and through every court.

Just as it has chased the state and (poor) people of Peru before, demanding payment of 100% of the face value (with rolled up interest thereon) of the bonds it bought at a tiny fraction of that face value.

It took years and years of struggle by peoples across the world to get debt relief for the poorest countries in the world through the IMF’s Highly Indebted Poor Countries and other initiatives.  Yet we are reminded that Blackstone in 2010, were “forgiven” $4 billion thanks to their “cozy” relationship with Wall Street.

“Hilton’s lenders and Blackstone are finalizing a deal that would cut its $20 billion debt load by about $4 billion, according to two people familiar with the negotiations. The agreement calls for Blackstone’s funds to contribute $800 million of new equity, which will be used to buy back debt at a discount. It would also extend the maturity of some debt issues, these people said.

Hilton is a poster child for overpriced acquisitions of the era. In July 2007 Blackstone agreed to pay $26 billion for the storied hotel chain. The firm’s funds and co-investors put up $5.6 billion in equity in the deal and borrowed $20 billion in debt from a group of seven banks. The banks sold some of the debt to investors but ended up keeping much of it on their books after debt markets closed later that summer.

A collapse of the business-travel market has hit Hilton hard. Blackstone has written down the value of its equity investment by about two-thirds, according to people familiar with the firm.”

Even worse, some of the pain at the time fell on the American people.  From the Financial Times (Francesco Guerrera, 7 October 2010), we read:

“The central bank received $4bn of the $20bn in loans used to finance the leveraged buy-out of Hilton in 2007 when it took on $29bn in troubled assets from Bear Stearns, the stricken investment bank bought by JPMorgan Chase.

The Hilton takeover was emblematic of the credit boom that preceded the turmoil, and saddled the hotel operator with high levels of debt just as the economic downturn hit the hospitality industry.

In April, Blackstone renegotiated the Hilton debt to improve the company’s financial health, buying back $1.8bn of debt for $800m – a steep discount to its par value.

The deal led to a 56 per cent loss on the debt held by the Fed that was sold to Blackstone. More than 20 other lenders, including banks and hedge funds, accepted the same terms and actually sold more of their debt holdings than the Fed, said people familiar with the deal.”

Now, while Blackstone, when in difficulties, ensured that the banks “caved”, so as to avoid paying the full amount of what was contractually due by way of debt repayments, Paul Singer’s Elliot Management takes precisely the opposite tack.  For him, contracts must be enforced to the last letter, the last ounce of flesh.

Paul Singer – champion of the rule of law, funder of politicians

Paul Singer is, according to Fortune Magazine, “a passionate defender of the 1%”.  He is said to believe deeply in the sanctity of contracts, a belief given specific practical expression through his use of “vulture funds” (such as his tax-avoiding Cayman Island registered NML, the main plaintiff against Argentina) which buy up distressed sovereign bonds at knock-down prices, and then using every legal and political weapon to enforce them.

We know (and have recounted) how he has used the US legal system to gain exceptionally favourable discretionary remedies from friendly judges against Argentina and the exchange bond-holders.  But his financial support for politicians also comes at a price, it seems.  According to Fortune again (“Mitt Romney’s hedge fund kingmaker”, 26 March 2012):

“Singer signed on with Romney after his first choice, New Jersey governor Chris Christie, said he would not run.

In the role of would-be kingmaker, Singer has his own agenda — specifically, gaining official support to win his battle with Argentina over the more than $2 billion he says the country owes his firm.”

“Mr Singer chafes at the term ‘vulture fund’. Not paying creditors often speaks to a wider government corruption likely to be harming citizens even more than bondholders, he says. ‘He is focused on the rule of law,’ says a person who has worked with him. ‘He believes in it wholeheartedly’.

“ ‘..doesn’t get into fights for the sake of fighting. He believes deeply in the rule of law and that free markets and free societies depend on enforcing it,’ said a fellow hedge fund manager, Daniel S. Loeb.”

Singer was particularly incensed at the bankruptcy settlements for General Motors and Chrysler, which preserved many jobs and has enabled these US manufacturing companies to revive.  Incensed because, for once, he didn’t get his way – and so (unused to tasting his own medicine) he resorted to accusing government of “bullying”. This passage is from “Summer Reading: Paul Singer’s 2nd-Quarter Letter” in the New York Times, 19 August 2009 by Zachery Kouwe:

Not surprisingly, given Elliott’s position in the debt of Chrysler and General Motors, Mr. Singer is highly critical of the government’s attempt to rescue the auto industry.

“The normal workings of the bankruptcy process were cast aside,” he said. “Stakeholders were variously bullied or cut out entirely from the process.”

While Elliott eventually voted for the reorganization plan rather than putting up a fight, Mr. Singer suggests the auto task force gave in to the companies’ unions at the detriment of other stakeholders that were due larger recoveries.”

And which stakeholder was “due” a larger recovery than Elliott Management? Not those auto workers, for sure!

Yes – pacta sunt servanda; contracts must always be kept, debts must always be paid – in full.  To Singer and Elliott Management, at least. Or the rule of law will collapse… you see, it’s an ethical not a financial thing.

But as with every “rule”, there are exceptions. If you are one of the world’s wealthiest, most powerful private equity funds, you don’t have to pay all of your debts. You just remind  your creditors – Wall Street and governments –  that the usual rules don’t apply.  And they quietly cave in.

So here we have it… when governments don’t pay their debts in full, they are to be chased for all eternity by Paul Singer (with the total support of the American judiciary) – because he is inspired not, we are told, by a desire to make as much money as he can, but by his pure  moral fervour to stamp out their corruption.

But when Blackstone (whose Chairman funds the same Republican candidates as Singer) doesn’t want to pay its debts in full… well folks, that’s just the way contemporary debt-fuelled private equity capitalism works.  The interlocking system of appointments and payments involving American politicians, billionaires and ideologically driven judges represents the “summum bonum” of the rule of law – not, heaven forfend, a system of increasingly corrupt and corrupting financial capitalism, imposing and living by double standards.  One standard by which it should be judged (and from which it should be set free). And one – far more stringent – by which the rest of the world must be judged and executed.

Editors’ note: We have kept the phrase “debt forgiveness” in quotes because, in the field of sovereign debt crises, we in PRIME consider that the issue is not to achieve one party “forgiving” the other’s debt, but to secure justice between the parties – hence the calls for debt resolution or write-down, not “forgiveness”.  This is because in any case of sovereign debt crisis, the responsibility for that crisis almost always is shared by both creditor and debtor, and is not the sole responsibility of the debtor.  But since Henny Sender used “debt forgiveness” as her term of choice – and an apposite one in the circumstances – we have stayed with it in this article. 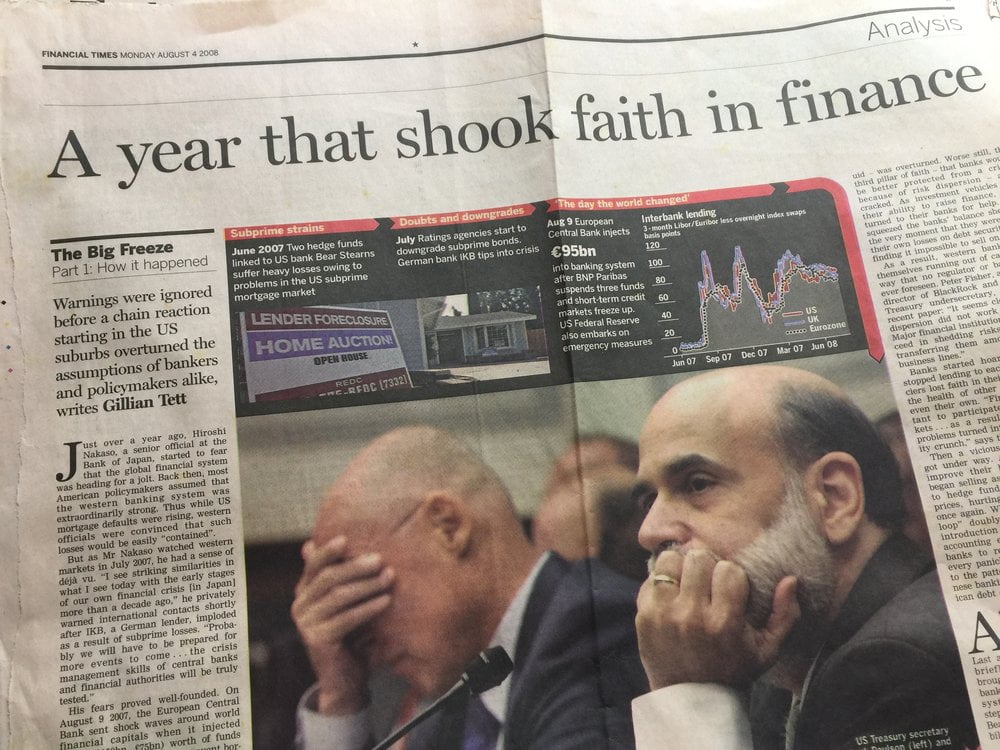 10 years after: a series reflecting on the Great Financial Crisis