If, as a result of Brexit, the economy crashes it will not vindicate the economists, it will simply illustrate once more their failure.

We, at Policy Research in Macroeconomics (PRIME) call for an urgent, independent, public inquiry into the economics profession, its role in precipitating both the financial crisis of 2007-9, and the subsequent very slow ‘recovery’. Finally the role of the profession in the run up to the British European referendum campaign.

As this morning illustrates, financial disarray is not unlikely under Brexit, but whether this turns into anything material depends in the first instance on economic policy.  Labour’s John McDonnell was quickly out of the blocks to warn against George Osborne’s and Alastair Darling’s “punishment budget.” But, even if Osborne resigns, as he should, can we trust economists at the Treasury not to impose more disastrous policies?

Economists have once again proved themselves not only irrelevant, but a dangerous irrelevance.

For too long they have resisted call after call for reform. If they will not do it themselves then it is time for others to take control. The profession should be brought to account through a public inquiry into the this failure.

Brexit and the economics profession

While it is risky to second guess public opinion, it may just be that the prospect of hardship to come might not have been very compelling for those already suffering the hardship of low wages, insecure low-skilled jobs, bad housing, high rents, an under-resourced and increasingly privatised NHS, and other forms of public sector ‘austerity’.

With this historic vote, the British people have not just rejected the EU. They have done something that should worry the British establishment, and their friends in the City of London, and internationally, far more. They have rejected economics – and in particular the dominant economic narrative.

Unfortunately, the economics profession as a whole cannot resign, though perhaps the President of the RES, Andrew Chesher, should consider his position.

Because this hardship is indirectly a consequence of the economics profession. Economists led the way to financial liberalisation of the past 40 years, which led to soaring levels of debt, crises and financial ruin. Economists dictated the terms for austerity that has so harmed the economy and society over the past years. As the policies have failed, the vast majority of economists have refused to concede wrongdoing, nor have societies been offered alternative economics policies.

Perhaps most symbolically, even the Queen suggested they did not know what they were doing.

It is hardly surprising, therefore, that the British public did not find the opinion of Remain ‘experts compelling’.

Remain chose to focus on the economy – to the exclusion of almost all else. All the heavyweights of the economics profession – 10 Nobel Prize-winning economists, the OECD, the IMF, the Federal Reserve, the Bank of England, the NIESR, the Institute of Fiscal Studies, the London School of Economics – were wheeled out to warn the British people of economic facts known, and understood apparently, only to “experts”. The Financial Times amplified their voices and repeated their dire threats and warnings over and over.

But the “experts” and the economic stories they tell, have been well and truly walloped by the result of this referendum. And rightly so, because while there is truth in the story that international co-operation and co-ordination is vital to economic activity and stability, there is no sound basis to the widely espoused economic ‘religion’ that markets – in money, trade and labour – must be unfettered, detached from democratic regulatory oversight, and must be trusted to ‘govern’ whole countries, regions and continents.

The British people have today rejected this mainstream, orthodox economics, a strain of fundamentalism that they may rightly judge has proved deleterious to their own economic interests.

The economists will retaliate

Some economists have been getting their retaliation in first. Chris Giles, chief economist at the Financial Times, argued that vindication or otherwise for the profession will depend on whether crisis materialises after Brexit. But at the same time the Chancellor (backed up by New Labour’s Alastair Darling, the Treasury and the Financial Times) threatened the British people with an intensification of austerity – a punishment budget. One in which public spending would be further slashed and taxes raised – the most punitive and counter-productive economic strategy imaginable. And in doing so, they, and the economists that advised them, affirmed once more their contempt for ordinary voters, and their irrelevance to serious economic analysis.

I voted to Remain. I do not believe that Brexit is a wise decision. I fear its consequences in energising the Far Right both in Britain but also across both Europe and the US. I fear the break-up of the United Kingdom, and the political dominance of a small tribe of conservative ‘Little Englanders’. They will diminish this country’s great social, economic and political achievements.

But the people are not to blame.

The economics profession, and their friends amongst the world’s financial elites, are to blame. They engineered their own political and financial bail-outs after the grave financial crisis of 2007-9. Economists cheered on politicians and effectively urged them to transfer the burden of losses on to those most innocent of the crisis. Conservative and Social Democratic politicians with friends in financial circles, were only too happy to oblige.

The economics profession encouraged the imposition of austerity, in both the US (Ken Rogoff  ‘Mr 90%’, who, with Carmen Reinhart, called for a ceiling on public debt), the UK (on page 3 of Economic Consequences of Mr O, see this letter to the Sunday Times from twenty of the most prominent British economists) and of course, from the OECD (see this “UK should press on with austerity”  issued just before the 2015 general election).

They – and we – are now paying the price for that calculated, reckless refusal to make the City of London and Wall St. accountable in full for the crisis – by restructuring and re-regulating both these financial entrepôts.

Above all, economists failed the British people by “pressing on with austerity”. They stubbornly refused to once again promote the subordination of the finance sector to the role of servant, not master of the British economy, and to use governmental monetary and fiscal powers to alleviate the impact of a crisis made in the City, on the majority.

That is why we urgently need a public inquiry into the role of the economics profession in Britain’s financial crises.

PS Because of a publishing glitch, links were not included to articles and letter mentioned above. This has been corrected on 24 June, 2016 at 21.07. The Power to Create Money out of Thin Air 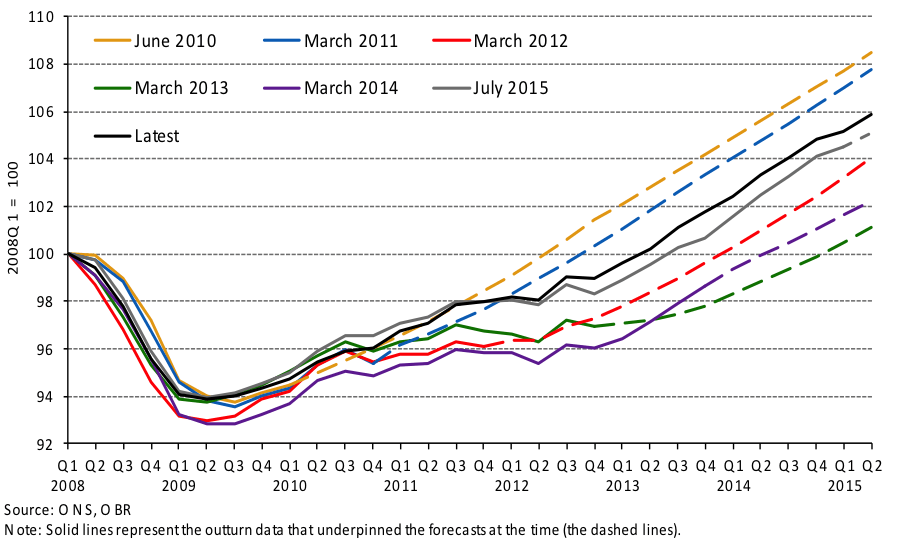