The estimated increase of Q4 over Q3 was 0.5%, wholly due to a quarterly increase in services of 0.7%, compensating for small falls in industrial production and construction.   Within services, the biggest Q on Q increases were in ‘business & finance’ (+0.9%) and ‘distribution, hotels & restaurants (+1.1%).

But looked at from an annual (Q4 on Q4) perspective, the latter (‘distribution’) saw a big volum increase of 4.2% while ‘business & finance’ saw a more sedate 2.1% increase – in fact the slowest annual quarterly rise since Q4 2010.

Whilst ‘distribution’ etc. saw the largest percentage increase of any sector in volume terms, we can be sure that this will not be the case when the nominal (current prices) GDP  figures are published, since the actual amount spent in shops etc. has hardly increased, while (due to deflation) the volume purchased has substantially increased.

In fact, as we have pointed out in recent posts, in Q3 nominal GDP increased at the same rate (2.1%) year on year as real GDP, and in Q4 we can expect that nominal GDP will only slightly surpass real GDP.  This will have a negative impact on the government’s finances (tax receipts like VAT are based on price not volume!).

It also means that the politically important deficit and debt to GDP percentages – which are based on nominal figures – are likely to be higher than previously estimated by the Office for Budget Responsibility in its November 2015 Economic and Fiscal Outlook.

We should therefore brace ourselves for bad news when the budget comes along in March.

Postscript (added 16.45h 28th January).  I really should make reference in this Update to the ONS data (see Table P) for the annual and quarterly change in GDP per head of population, which is the nearest the GDP stats take us to an indicator of economic well-being.. The estimated increase in GDP per head for 2015 is just 1.4%, compared to 2.1% for 2014.  It is the lowest since 2012, when it was just +0.5%

Looking at the Q on Q figures, GDP  per head in Q4 is estimated to be up 0.3% on Q3.  Since the UK’s population is rising faster than many other countries’, GDP per head is in many ways a more realistic assessment of the overall state and trend of the economy than the “pure2 GDP numbers. 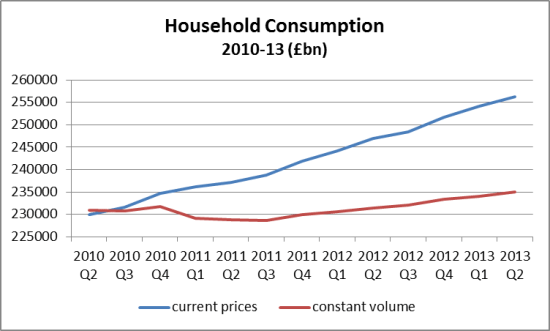